This is the mourning dove. It is a brown bird, the male can have the purple-pink along its neck and breast for attracting mates. The female might be more brown than the male is. The physical appearance between the male and the female is different but only ever so slightly, although these birds are considered sexually dimorphic. The mourning dove is also monogamous, which means it mates for life. You can find a mourning dove in any semi-open habitats. This includes forest clearings, farmland, suburbs, prairies, and deserts. They will go pretty much anywhere other than deep forests. Male Length: 9.1-13.4 in (23-34 cm) Weight: 3.4-6.0 oz (96-170 g) Wingspan: 17.7 in (45 cm)  Female Length: 9.1-13.4 in (23-34 cm) Weight: 3.0-5.5 oz (86-156 g) Wingspan: 17.7 in (45 cm). The only different between the male and the female is the color and that the female would be slightly smaller. These birds are of least concern. Although these birds are hunted for fun in the U.S., they are still thriving with an estimated population of 183 million. Posted by Jose Robles at 3:31 AM No comments: 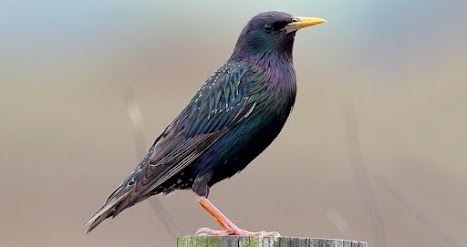 The European Starlings look like birds that rolled around in oil but these blacked spot songbirds were actually an evasive species. The Starling's Latin name is Sturnus Vulgaris which means "Common Starling".  This wonderful bird weighs 2-3.6 ounces and is 8.5 inches tall. The Starling can only live up to 2-3 years in wildlife but as a pet, they can live up to 20 years. The Starling also has a talent for mimicry for both mating season and protection by learning different sounds they can attract female starlings by combining songs and they also use these sounds to alert other birds of predators.  Starlings eat beetles, worms, spiders, seeds, berries, fruit, and etc. This is mainly because they can change their diet based on the seasons. Starling also love to live around people a lot so you can find them on lawns, farms, or on the city streets. Their status is least concered and there are more than 200 million all around the U.S and part of Canada. Starlings do small migration movements like moving a little bit south for warmth but most of the time they are chilling with us for all seasons.

Posted by Nasir Thompson at 9:29 PM No comments:

The Northern Cardinal, also known as the Redbird and it’s Latin name Cardinalis Cardinalis which means  crested thick-billed North American finch having bright red plumage in the male. The males are mostly red with a black face surrounding the bill. The Females are all brown with some red in the wings, tail and crest. It’s body length is 8.3-9.3 in, wing span 9.8-12.2 in, adult weight is 33.6-65g with the average being 44.8g. The Northern Cardinal does not migrate. In fact, they stay in the same area whether it is winter or summer. Northern Cardinals’ Habitats include woodland edges, thickets, suburban gardens, towns, desert washes. They eat weeds, sunflower seeds, grains and fruits. Their favorite food is seeds.  They are of least concern in terms of population with about 100 million globally. In the United States they are very protected because you can’t hunt them or have them as cage birds.

Posted by Diego Sanchez at 7:36 AM No comments:

Wow! This bird looks like Tweety from Looney Tunes. Well... close because this bird is actually the American Goldfinch. The American Goldfinch's Latin name is Spinus Tristis which means 'sad blackthorn.' This bird is so well known it has become the state bird of three states: New Jersey, Iowa, and Washington. Their size is around 4.3-5.5 inches and weight being around 0.39-0.71 oz. The male goldfinch is bright yellow in color while the female is brownish-olive. These birds do not migrate very often. You will only see these birds migrating from cold areas such as Canada. American Goldfinch's habitat are woodlands, roadsides, floodplains, gardens, and weedy fields. They stay in these areas because their main diet is based on grains and seeds. Very rarely they will eat small insects for a source of protein. Their status is of least concern because there are roughly 24 million in the world. Better for us, we don't have to worry about not being able to see these beautiful birds again.

Posted by Sandeep Singh at 7:17 PM No comments:

American crows spend most of the year living in pairs in small family groups and they usually mate for life. They remain loyal and stay with their respective mates year after year until and unless the mate is killed or it becomes incapable of mating any more.

American Crows can be considered partially migratory. That is, some populations migrate, others are resident, and in others only some of the crows migrate. Crows in the southern parts of their range appear to be resident and not migrate.

There are 27 million in the world
what hunts them
hawks and owls
Hawks attack, kill and eat them during the day,Owls come after them at night when they are on their roosts,But crows also attack hawks and owls—though not to eat them.
Why it’s associated with death
Crows were associated with the Black Plague, the Great Fire of London, and the Civil War, when they would follow soldiers to the battlefield," explains Haupt with a warm existentialism. "This is why when we see crows in the city, they open up a whole mythology of death."
Posted by Isaac Ezirim at 6:47 PM No comments: 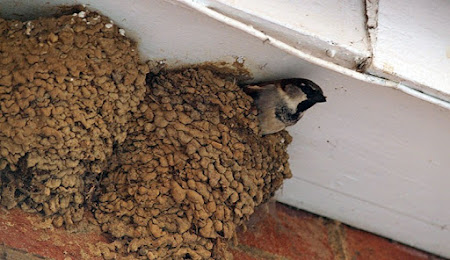 This is an image of a House Sparrow, or Passer Domesticus, meaning house sparrow in Latin. An interesting fact about these birds is that their preferred habitat is in suburban or otherwise man made areas. House Sparrows are one of the most successful birds in the world, with their population including 8.2 billion individuals world wide making them least concerning. The house sparrow is a common bird, especially in North America. They are considered pests in the U.S. meaning it is legal to kill them, but this has not effected their numbers in significant ways. They eat fruits, berries, seeds, worms, and caterpillars. During courtship displays, the male will hop around the female with his tail feathers raised high and often bowing and chirping. They measure 5.5 to 7.1in in length, and weigh 0.5 to 1.4oz.
Posted by Myles Onion at 10:59 PM No comments: 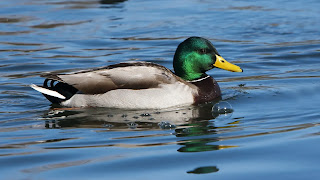 This is a mallard duck. A mallard duck is known in latin as "Anas Platyrhychos" which means flat nosed which relates to the shape of a duck's bill. An interesting fact about Mallard ducks is that male ducks are called drakes while female ducks are called hens. They also have different colored head's and beaks. This is due to the drakes eating more algae than the hens and therefore getting more colorful heads and beaks because of the catenoids found in the algae. Catenoids are pigments found in food sources for ducks like algae that make vegetables brightly colored. These ducks usually live in rivers, lakes, and woodland wetlands. This is because ducks love the water. Since ducks are omnivores, some of their preferred foods are Insects, Fruit, Seeds, Algae, Small Fish, Crustaceans, and many more. They are the least concerned when it comes to their status, they have a population of over 30 million.
Posted by Gary Hunter at 9:08 PM No comments: