European Starling in North America started from 100 birds set loose in New York's Central Park in the early 1890s. That's history, now they are one of the most popular birds in the states. The Latin name is Sturnus Vulgaris meaning common starling. You can tell if your looking at a male of female with couple pointers. First, the males are a bit more oily and have brighter colors then the female. This is used for matting because the brighter they are the more females it attracts. Which is not a problem because European Starlings are great nest makers. And eat nearly anything but they mostly go for insects or fruits because they are such lowland birds. This means they do not like to fly high and rather stay closer to the land.
Posted by tyler dukevicz at 11:21 PM No comments: 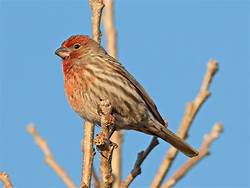 The House Finch is a very fascinating bird in fact. Its binomial nomenclature is Haemorhous Mexicanus meaning bird from the West. House Finches came from Mexico and were brought to the Western United States because they were going to be sold as cage birds. When this failed, they were released and bred rapidly and soon spread to the East in the next 50 years. They are sexually dimorphic being that the male has the bright red color on its head and upper breast. The female is generally brown having streaks going down its belly. They are very sociable birds and during mating season they will perform a flight song display to attract mates. They also will defend their territories by fighting other birds. They live on both coasts of the United States and you may catch them in cities, suburbs and even the countryside. House Finches will tend to eat anything. They like seeds, buds, and fruits. You may find they in orchards eating on peaches, pears, blueberries and more. This is a very common bird so the status of the House Finch is a low concern. If you ever see one, they are very beautiful, take a picture.

Posted by Nigel Edwards at 3:05 PM No comments:


They are sexually dimorphic. The female is duller and does not have a red nape.They move very quickly over trees branches and stems They move faster than other woodpeckers.They have courtship dances and when they have a dispute they raise their head feathers and jerk their beaks side to side. They eat Beetle larvae,Ants,Caterpillars,Plants and seeds,Berries, Acorns,Grains, and Seeds from feeders. 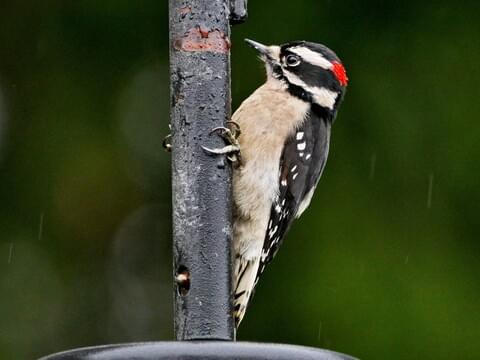 Posted by Francisco Correia at 10:25 AM No comments:

The red tailed hawk is a bird of prey. It lives around the United States and can be found in different parts of Canada. It lives around high mountains and grass lands and can be found in city’s and even your fence post. They have excellent eye sight and are birds that soar in the sky until they find their prey. They like to eat rodents such as mice , rats,,snakes and even birds. They have sharp talons and they use them to latch onto their prey. There nice birds to look at but don’t get close to them their dangerous

Posted by Leandro Cordoba at 12:58 PM No comments:

The Common Grackle also known by its Latin name Quiscalus Quiscula, which translates to "Grackles Grackle". The male is generally larger than the female. Although they both commonly have a dark, large bill, yellow eyes, and a long tail as adults. It's feathers are colors ranging from black, green, purple, and blue. Though it looks black from a distance the rest of its body  is bronze. These gregarious birds have been known to to devastate corn stock and when they're not ruining a farmers day they are stealing from other birds. In other cases Common Grackles have been known to eat other adult birds along with insects as well, which makes an omnivore. Though having its population in the millions its population has seen a decrease of 2% every year from 1966-2014. They still stay on the list of least concern even though this decline accounted for 58% of their population. Right now they are most common in Northern America thriving in the eastern side of the U.S..
Posted by Dario Guzman at 12:06 AM No comments: Red Winged Blackbird is a sexually dimorphic bird species. The males can identified as having glossy black feathers with a red and yellow patch on its shoulders. The females are brown with black spots. Blackbirds are extremely aggressive and are extremely polygynous, which means that one male can have up to 15 different mates. They are also of lest concern because they are one of the most abundant bird species in North America. But over the past couple of years their population has been on an decrease because of habitat lost. They are also closely related to brown headed-cowbirds and flock with them.